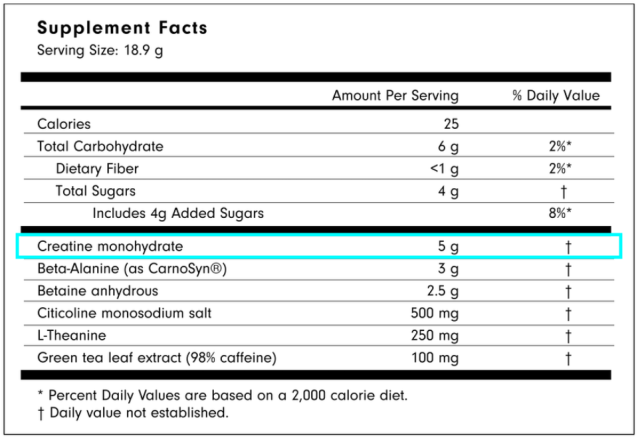 When I was hired by LeBron James and Arnold Schwarzenegger to create the formulas for Ladder, the first products we worked on were a protein powder and a pre-workout.

Every product started with a specific focus on the best ingredients. For us, “best” was not about new or different. We primarily measured ingredients based on three factors:

After all, most supplements no matter how much they are hyped, don’t make a big difference, and many of them are associated with potential risks.

One ingredient we debated thoroughly was creatine.

Arnold had many questions about the latest research and benefits, and if we would have enough education to overcome all of the terrible myths about the incredibly effective ingredient. Arnold knew creatine worked, but he was also aware of the bad perception, which wasn’t based on any science.

Meanwhile, LeBron and his team were focused on one thing: would every ingredient be an addition — or subtraction — from his performance? With creatine, in particular, he wanted to make sure it would support his athletic performance and not cause dehydration.

As a 2017 review of creatine points out:

“Several studies have reported that creatine supplementation during training and/or competition either has no effect or reduces the incidence of musculoskeletal injury, dehydration, and/or muscle cramping.”

Eventually (as you’ll soon find out), the benefits of creatine were too undeniable to keep it out of a Ladder formula. The next question was determining which product was the best fit.

Ultimately, we included 5 grams of creatine monohydrate in the pre-workout, but the primary reason was not because of the benefits of taking it before a workout. Here’s why the timing didn’t matter as much as the some and the source.

Why Anyone Benefits from Creatine

If I’m being honest, for years, I avoided creatine as if it were a black-market drug. But, then I reviewed the research and realized my fear was completely unfounded.

First of all, creatine is undeniably safe. We can replay how the story became so twisted, or you can trust the 1,000+ of published studies validating the safety and undeniable benefits of — arguably — the greatest performance supplement ever discovered.

In a nutshell, the benefits of creatine include:

As time has gone on, research has also discovered new evidence that creatine might also help:

But, one question has repeatedly popped up: When is the best time to take creatine?

Nutrient timing is a hot topic, especially for athletes and anyone looking for that extra edge in the gym or in body transformation. Part of this stems from science showing that the timing of carbohydrate consumption influences important aspects, such as glycogen replenishment (and in limited cases, muscle protein synthesis).

The other side is practical: You want the most bang for your buck when it comes to the nutritional products and supplements you purchase.

This concept of timing has been applied to everything from fat burners, protein supplements, carbohydrates, and various other supplements, which includes creatine. Because creatine can be so effective, it’s worth the investigation of determining if there’s an element that can give you even greater benefits.

Ever since creatine became a popular supplement, there have been three types of prescriptions: before a workout, after a workout, and whatever time you want. Here’s the theory behind each option.

Creatine Before Your Workout: The argument for creatine before a workout include that it should be able to increase power output acutely during your workout, allowing you to exert more force. More force might help you activate more muscle fibers and lift more weight. Those factors can lead to more muscle growth. So you can see where this is going.

Creatine after your workout: On the flip side, the argument for creatine after a workout is based around how after a workout your muscles are ‘primed’ for the nutrient influx, and you can just throw creatine in there as well and let your body soak up the powerful supplement to receive all of its benefits.

Creatine whenever you want: The argument for ‘take it at any time’ is based on the hypothesis that both of the former arguments are crap and you don’t need to stress yourself with worrying about timing. In other words: Creatine is good for you. So as long as you’re supplementing with it you’ll see the benefits

As you can imagine, the only question you care about is whether one approach is clearly better than the others.

The Best Time to Take Creatine

The basis of “take creatine after your workout” comes from a 2013 study published in the JISSN, which can be found here. In this study, recreational male bodybuilders (19 men overall) were given five grams of creatine either before or after their workouts. They trained five days per week but were also directed to consume 5g on their rest days at any time they wanted.

The workouts were fairly similar to most gym workouts, and the methodology (what they did and how they did it) suggests that the findings would apply to most weightlifters. This study became popular because the abstract appeared to paint a clear picture that taking creatine after a workout is better than taking it before. That comes from this section. (Pay close attention to the bolded portion.)

Creatine supplementation plus resistance exercise increases fat-free mass and strength. Based on the magnitude inferences it appears that consuming creatine immediately post-workout is superior to pre-workout vis a vis body composition and strength.

The thing is, when you take a much closer look at the research (and not just the generalized statement) there wasn’t any significant effect.

Statistically speaking (less than 5% chance what was observed was due to chance means ‘significant’ for this study) there was no significant difference between pre- and post- workout, meaning that both were equally effective. This protocol did note that both groups found benefits with creatine supplementation, but they both found the same amount of benefit.

When the study was broken down on a case-by-case basis, they did not find any significant differences between the groups, but they did find a trend that suggested that there may be a difference.

So, if we removed all of the jargon and big words, this is what the researchers are really saying: “We think that taking creatine after a workout is better than before, but we really need to study more to prove that.”

Several other studies have looked at creatine timing, but without any undeniable benefit to using it pre- or post-workout. But, that’s not to say timing is without benefit.

As Examine.com has noted about creatine timing, while before or after is majoring in the minor, taking creatine near your workout has value:

The benefits of creatine supplementation appear to be more prominent when taken closer to the resistance training workout than when compared to supplementation at other times of the day. Currently, it seems this benefit applies equally to taking creatine before the workout and/or after the workout.

The Bottom Line on Creatine Timing (And Dosing)

Many people take supplements that include creatine, so if that’s in your pre- or post- workout drink, you should receive all the benefits. Optimal dosing still appears to be between 2 to 5 grams per day, and the best form is creatine monohydrate (it’s what has been used for thousands of studies).

You can “load” for the first 5 to 7 days to help saturate your cells, but the loading is not necessary. It will simply speed up the process that helps your creatine stores fill up. Beyond that, there’s no benefit to taking large amounts. So save your money and take the smaller dose; it’ll still offer maximum results.

Why Creatine is Even Better Than You Thought

What is the Best Protein Powder?

What Everyone Gets Wrong About Artificial Sweeteners