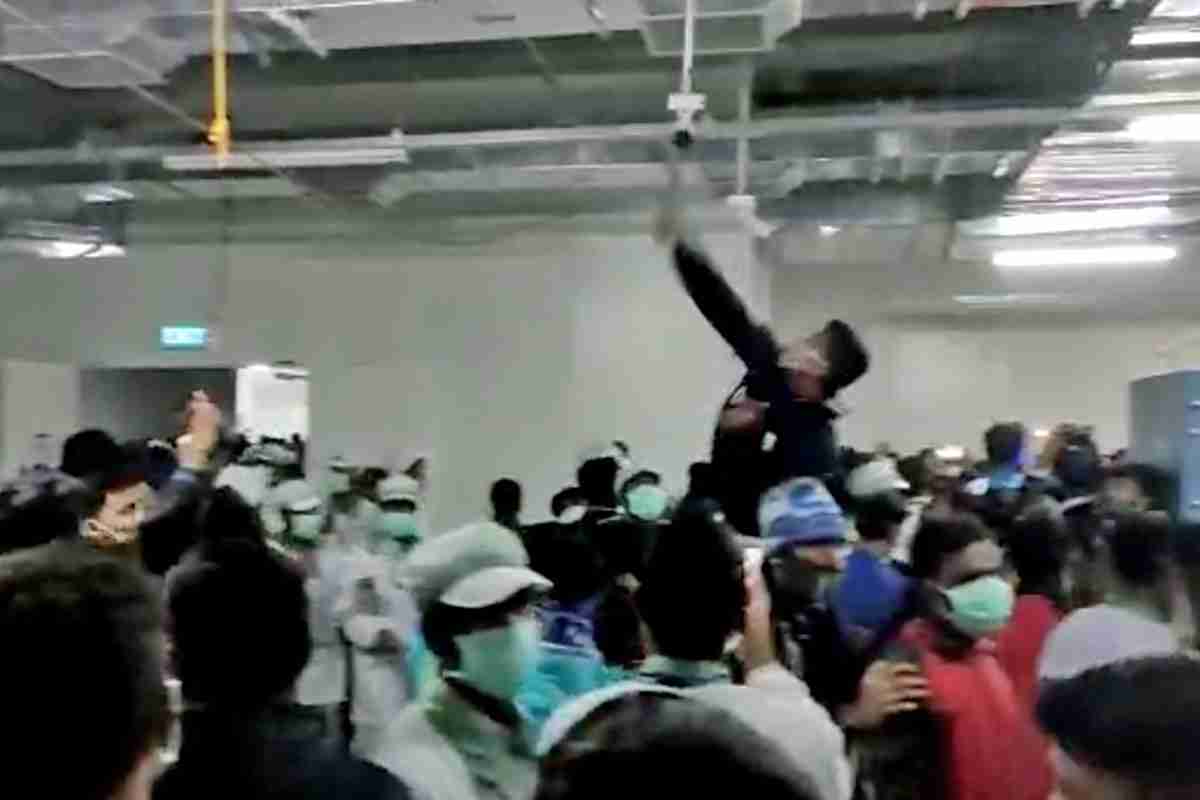 The employees have alleged that they were made to work for longer hours and not paid wages on time.

Taiwanese company Wistron Crop, contracted by Apple to manufacture iPhones in Karnataka’s Kolar district, was attacked by disgruntled employees in the early hours of Saturday.

Over 1,000 employees gathered outside the plant in Narsapura in Kolar, demanding rightful pay and protesting against the management for alleged non-payment of wages. The employees accused the management of overworking the factory workers and violating norms under the Factories Act.

Employees, who tried to reason with the management, pelted stones at the building and set two company vehicles on fire after talks with the higher-ups failed. The Narsapura police were called in and they resorted to lathi charge to disperse the workers.

Speaking to TNM, Kolar SP Karthik Reddy said that the incident occurred when the employees were changing shifts. “Employees working the morning shift met the management and demanded that the wages be paid on time. Some of them (employees) have said that salary payments are overdue for two months. We have collected the CCTV footage from the plant and are investigating the matter,” he said.

The police have arrested 80 employees of Wistron so far. An FIR has been registered at the Narsapura police station under sections pertaining to rioting, disturbing peace and vandalism, SP Karthik Reddy said.

Employees TNM spoke to said that many of them felt helpless and disgruntled as the company had allegedly not paid them wages on time. “They have delayed payments every month. Some of us have not received payment for two months,” one of the factory workers alleged.

He alleged that the employees had submitted several representations to the management requesting payment of wages on time. Another employee said that Wistron had sub-contracted hiring factory workers to six different firms and that they were promised Rs 16,000 per month in wages.

“When we showed up for work, we were informed that we would be getting Rs 12,000 per month. According to the Factories Act, working hours are capped at 8 hours per day. The company is making us work for 12 hours straight,” the employee alleged.

Sathyanarayana, Secretary of the All India Council of Trade Unions said that employees at the Wistron Corp plant in Kolar do not have a union, due to which they were finding it hard to fight for labour rights. “The information we have after speaking to the employees is that many of them who complained about the discrepancies to the management or stood up to them, were fired. Many workers were scared to speak up. The issue has been going on for over six months. With delayed payments, many of them are struggling. When talks with the management failed, they were angry,” he added.

At the time of writing, TNM was unable to get Wistron Corp’s reaction to the incident.

What Is a Podcast, Exactly?